More over yonder. Here's yonder.
Posted by susan at 8:24 AM No comments:

"[Stay-at-home mothers] make it harder for the rest of us to remedy the inequities that remain. We have to make young women aware of how their choices affect other women. It should be acceptable criticism to point out that, although everyone has the right to make their own life decisions, choosing to “opt out” reinforces stereotypes about women’s priorities that we’ve been working for decades to shatter, so just cut it out. And, the “individual choice” women have to become stay-at-home moms becomes precarious when they try to return to the workplace and find their earning power and options reduced. If we could see child-rearing as a necessary task and not an identity, and if we could collectively recognize that facilitating it benefits us all, we would go much further in guaranteeing women’s choices than we do when we are expected to uncritically celebrate every individual’s decisions."  Gloria Feldt (former Planned Parenthood head)  as quoted in the NY Times.

I have seen behind the curtain and the Wizard is pretty damn ugly.  (Thanks  Tony.)
Posted by susan at 10:28 AM 1 comment:

On this Harvest Moon (I'm still in love with you) 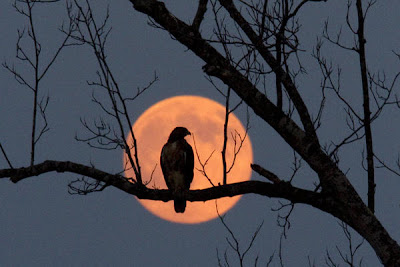 The fall equinox happened on Thursday and along with it, the full moon for the first time in twenty years.
If you don't live in this part of my city, you'd probably be surprised at how quiet it is at night. The city bus stops running at about ten, so people stop moving up and down the street toward the bus stops on either end. The cars pretty much stop, too. In the summer the June bugs and air conditioners hum mechanically all night, but this time of year they've generally quieted. (Except for this week when the Indian Summer has driven the temperatures back up to the high-nineties once again.)
I came home late last night and stood on our stoop looking up. Up at the red eyes of the television towers and the full moon hanging heavy between them. The clouds were fragmented and thin as they blew across the face of the sky. There in the darkness at the divide of the year, my neighborhood was quiet. Quiet and holy. Holy. Holy. Holy. I lifted my hands (He stretched out his Arms) and resisted the persistent peace (that comes with acceptance) as it washed over me in waves and ribbons. It wasn't a mistake. You didn't make a mistake. The answer to the question of my heart for all these months. I haven't been ready to let myself off the hook.
We came to the city for the "right reasons," I realize now, but with the wrong...well, methodology? Intentions? Theoretical constructs? Something. Something wrong. Nevertheless, we came and we failed. On a truly Magnificent Level. On the level of failed marriages, failed priesthoods, failed friendships, failed churches, and ultimately failed religions.
I made the comment last night with some of my friends that David and I never wondered if we had a missional call. Not true, said my friend, because you went there. We came here. And we are still here. And after six years of testing and proving and development, maybe we're finally ready to do what we came to do. And it's so much simpler than I thought and so much harder.
I have a feeling after writing this, that some of you are looking at me through your computer screens and thinking "Well, I'm glad she's finally come to terms with her failure." And I ask you, with sincerity, have you come to terms with yours?
Yeah. Me neither.
Posted by susan at 8:48 AM 3 comments:

Art and Faith in a Post-Postmodern World 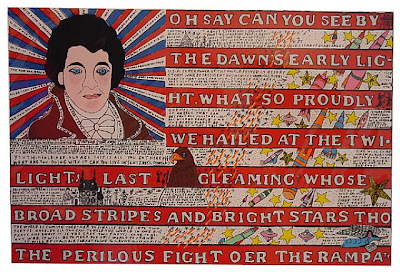 A friend of mine who knows much more about art than I do said "This is crap. A two-year-old with a crayon could do it." And since then, I have been praying my two-year-old will start making Howard Finster's with her crayons. As of yet, it hasn't happened.
Sometimes I have a few thoughts rolling around my mind like individual gumballs in one of those old-fashioned fishbowl machines. Jumbled and autonomous. So I work on those thoughts awhile and I start to pray about them and I realize their cohesiveness. Sometimes, all in a rush. Eureka! I have found it! Archimedes, meet Blind Bartimaeus. Physics and Metaphysics bound with a bow. Today I've had such a moment.


So, that's gumball one.


The second is something David heard on the radio this morning from a fairly well-known Christian speaker. "I'm going to tell you," he said, "About something you probably haven't heard about. Yet it is invading the Church!" What was he speaking about? Postmodernism. Yeah. Something we've been chewing on and contemplating and waxing poetic about since the end of the Second World War. So, I guess after seventy years it's time the Christian community jumped into the fracas. Now that it's over, that is. It's not that people have rejected the basic postmodern hypothesis that objective truth doesn't exist, it's just that objective truth didn't die like it was supposed to. We're frying other fish. But if you're a Christian, you probably won't hear about it for another seventy years. Not shrewd. Not shrewd at all.


It's fundamentally depressing, isn't it? We are safe. We are soft. And the relevant church is seventy years behind the academic and artistic community that we used to lead. I've long suspected it, but now I'm sure of it. We need to bone up on what those Sons of the World are up to because their art, their music and their literature shows whats going on in the heart of the culture. And that's Our Father's Business, isn't it?


The problem is that it isn't always pretty. What's going on in the heart of our culture? Most of us know that our culture is suffering from profound sexual brokenness that stems from and is exacerbated by loneliness. We see a whole new objectification of women, but we're also seeing the culture rip the dignity off of the elderly and the helpless. We see that, but we don't want to talk about it. We don't want to paint it or write about it or sing about it. Because we don't want to be defiled by it? Or, because we're scared of it? It's hard to be dangerous when you're hiding under a rock. (Just ask Gideon.) I believe, in my heart of hearts, that the Gospel is real and Jesus changes things. From the dawn of time, human beings have expressed their inmost truth by singing and telling stories and painting. This the image of God reflected in us.


Let's sing about Jesus. Let's paint about Jesus. Lets write about Him. Not silly things either. Not the tired morality plays we've already got a million scripts for. Do we believe the Gospel is big enough to conquer sexual addiction? Let's make art about that. Do we believe the Gospel can heal loneliness? Let's write about that. Let's be top-shelf literary theorists. Let's be the best music critics Rolling Stone has even known. Let's curate modern art museums. See my point? But the deal is, we can't be half-assed (and haven't we become comfortable in the world of Half-Assed Art?) Because those Sons of the World are shrewd. And they will know. We've got to be the best and the sharpest and we're going to have to see modern art. We're going to have to look upon the brokenness of the world as reflected in literature of the not-beach variety. Jesus looked on our brokenness and wept. Does he expect any less from us?

We will all go together when we go (when we go)

Today I read Michael Rowe's fascinating blog on the Huffington Post about Anne Rice's decision to renounce the title of "Christian." Two things strike me at once: First, that I cannot renounce the name of Christian. And second, that Evil's purpose to scatter the sheep is becoming more evident with every breath.

I know, as does Rowe, what the title "Christian" has come to mean. And so do you. So, I won't elucidate here. But I must say that as long as He strengthens me to do so, (remembering Saint Peter) I must bind to myself the name of the Savior who lifts me out of the muck and the mire. Who gives my feet a firm place to stand and enables me to do so confidently in the presence of an altogether Almighty God. What they called Him, they will call me. How they felt for Him, they will feel for me. What they did to Him, they will want to do to me. And I must count it as gain.

And I am reminded at the same time that as Christians, oh my brothers and sisters, as Christians, we cannot forsake assembling together. As for me, my feet had almost slipped in the matter. I am thankful for the process of redemption. We cannot - as meddlesome and altogether vexing as they are - forsake other Christians. Their sin is repugnant to us. The smell of it lingers in our nostrils like the smell of burning death. Yet, it is no worse than ours. We must awake to the realization of the little foxes in our vineyards and understand that we all stand together, before God, utterly condemnable. Amen? Amen. We need the fellowship of the saints. An orthodox faith doesn't stand alone.

I know you already know, but I thought it worth restating.
Posted by susan at 11:14 AM 2 comments:

Who is Owen Meany?

Owen Meany is a fictional character from the book A Prayer for Owen Meany by John Irving. It's a story worth your time by an author whose work can stand shoulder-to-shoulder with that of any American writer. (And his other novels aren't half-bad either.) 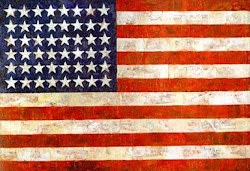